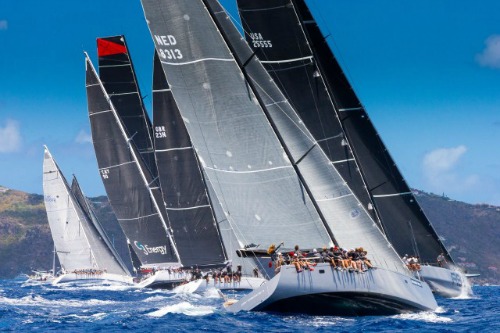 Les Voiles de St. Barth: Starting off Just Right With winds whipping briskly at 15-20 knots, it was a lively show on the water for opening day of Les Voiles de St. Barth. After an equally lively opening party held on the Quay General de Gaulle last night, 70 teams in 10 classes were raring to begin what they really came here for: hard core racing. The regatta organizers, knowing their audience, took no prisoners, sending Spinnaker 1,2,3 and 4 plus Non Spinnaker and the Melges 24 classes on a 23-mile course that started off Gustavia Harbor and led counter-clockwise and three quarters of the way around the eight-square-mile island of St. Barth before rounding a buoy off St. Jean and heading back in a clockwise direction. For the Multihulls and the larger monohulls sailing in Maxi 1, 2 and Spinnaker 0 classes, a similar course added an extension on the far side of the island to incorporate a total of 39 miles.

“Today was typical St. Barth conditions–20 knots of wind, big waves and a lot of reaching legs, so it was a lot of fun being on a boat like a TP52 and surfing downwind in big waves,” said Gavin Brady, tactician aboard Vesper, which was today’s winner in the six-boat Spinnaker 0 class. “We had a good day, starting the regatta off with a win. We have large spinnakers on the boat for this event…so it worked out really well. We hope these conditions last for the rest of the week.”

Vesper had a scare yesterday when one of its side stays, made of carbon, gave way.  Luckily, a rigging shop in St. Martin was able to provide a rod-rigging replacement overnight.  “Carbon rigging is fine for the big boats like Comanche and Rambler where they have bigger safety margins for going out in the ocean, but with a little TP52 blasting around St. Barth or doing the Med Series, it’s another story,” said Brady.

Vesper is sailing against two other TP52s (Sorcha and Team Varg, which finished second and fourth, respectively), but third-place Spookie poses a threat, too. “We are in a class with TP52s, which in every handicap system seem to be the sweetheart boats,” saidSpookie’s Strategist Peter Holmberg. “We know we just need to sail out of our league to beat them.”

The Mod 70 Phaedo 3 handily won the seven-boat Multihull class, which was the last of the 10 classes to start. The foiling G4 Timbalero III’s successful attempt to port-tack the fleet at the start looked swift, but it wasn’t swift enough to hold off the giant green trimaran, which started slightly late at the windward end of the line but came screaming in with all the power of a giant eagle swooping in for its prey. While Timbalero IIIcontinued on starboard tack out to sea, Phaedo 3 continued on port tack to shore, no doubt giving sunbathers at Shell Beach a shock as she flew by on one hull, then tacked up the shoreline for a horizon job done not only on the other multihulls but also the entire fleet.

Phaedo 3 finished the long course in just over two hours and 25 minutes, approximately 34 minutes ahead of the next fastest boat in the fleet, Comanche, whose long-awaited battle with Rambler 88 yielded some answers today. Though Comanche beat Rambler by ten minutes in real time, which pleased her crew, Rambler had to be satisfied with beatingComanche on corrected time (5:04:48 compared to Comanche’s 5:11:30), even with a spinnaker problem that forced them to change headsails and cost them several minutes.

Taking second in Maxi 1 class, where they are grouped with Rambler 88, Comanche andBella Mente, was Lucky, with Mark Watson standing in as driver for owner Bryon Ehrhart (who will arrive to drive tomorrow). “We sailed a good race; we really didn’t have any big mistakes at all,” said Watson. “When you think about it, normally the team that wins is the team that has the fewest mistakes. A happy boat is a quiet boat, so everybody was pretty dialed in together, and the boat was immaculately prepared, so I couldn’t ask for more.”

Bella Mente, a favorite here, unfortunately was unable to race today because of an equipment failure that occurred only a few minutes before the start. “We had a hiccup today, but you can bet we’ll be out there and ready to race tomorrow,” said owner/driver Hap Fauth.

In the Maxi 2 class, Lupa of London led the way today, while in the Spinnaker 1 class,Lazy Dog won. Ventarron, Music and Martinique Premiere-Credit won the Spinnaker 2, 3 and 4 classes, respectively. L’esperance took Non-Spinnaker class, while GFA Caraibeswon the Melges 24 class.